I was at a family reunion last week, running after my toddler all afternoon to keep her away from the knives and power outlets. One of my cousins remarked that she’d always just let her children run free; they had to learn for themselves, didn’t they? That got me thinking.

The most used term for over-parenting your child is helicopter parenting, named for parents hovering over their children like a helicopter. It was apparently coined in the sixties.

The negative effect is that these children are less developed in their motoric and social skills because they’ve always had their parents do everything for the.

The thing is: I stay close to my daughter at the playground because I’m afraid she’ll hurt herself. Am I a helicopter parent? Am I not letting her learn enough herself?

Let me tell you a story. A few days ago I was on the playground next to the supermarket with my daughter. Take a look below at the picture I took. 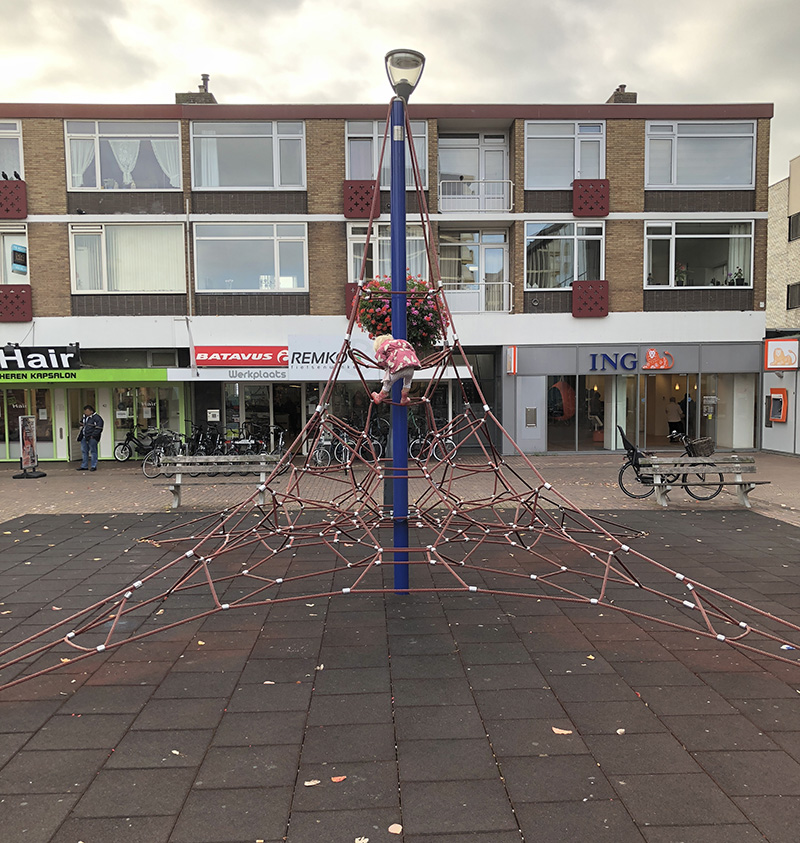 She’s about two meters up at this point, and she went up another rung before her hand slipped while leaning against the blue column in the center of the jungle gym.

She slipped, fell, then tumbled all the way down, bounced off the ropes three times before hitting the rubber tiles below. My heart skipped a beat, then she began to cry. I ran over, hugged her and checked all her limbs. No blood anywhere, nothing bent the wrong way. She was unhurt (this time) and stopped crying a few seconds later.

At the larger playground we go to, she’ll climb even higher, then climb across chasms three meters up in the air. At the daycare her nickname is ‘little monkey’ and she routinely comes home with bruises and bumps. She nearly lost two of her front teeth at the age of two, and did lose a thumbnail after another mishap. Two times half her face was red with chafing from falling onto the ground and one time I was afraid she had broken her nose because it wouldn’t stop bleeding.

So, again, am I a helicopter parent?

I don’t think I’m overprotective, given how reckless my daughter is. My wife and I did something right, or nature helped a hand. I don’t know. The end result is that she’s a very feisty and independent little toddler.

My daughter routinely pushes me out of the room and says she’ll handle things herself. That room might be the toilet, her bedroom, or the garage. The last has power tools that are probably out of her reach, but one never knows with her. I balk at that one.

She’s very social and they love her at the daycare. I don’t think she has any social problems she can’t solve. On the contrary, I try to keep her from being too bossy to children twice her age.

The thing is, I don’t know if she’s reckless and bossy because I’m always there, or because she’s just the way she is. Is she reckless because she’s knows I’ll always catch her? Or is she a thrill seeker? I do know that if I let her be, she’s quite capable of pulling stunts that can get her seriously hurt. I’m pretty scared that I’ll be watching her dropping down a mountain in a wingsuit a decade or two from now.

In the discussion about helicopter parenting we should maybe be careful to also look at the child in question’s temperament. It’s important to have the right parenting style for your child and maybe some children do require a bit more helicoptering than others. Or it could be that that’s bullshit and I should really let my daughter figure things out herself.

Bottom line, I’ll keep on doing what I’m doing for now. It’s good to keep in mind not too be overprotective, but I’m not going to eat myself up about my parenting style just yet.