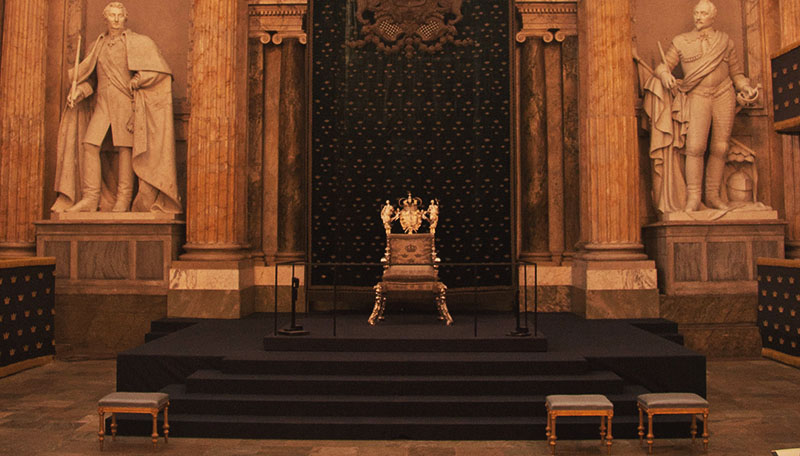 I was kind of bored and annoyed that I couldn’t find a good overview of what ways there are to set up a government. So, after strolling around Wikipedia for a while, I put one together myself: 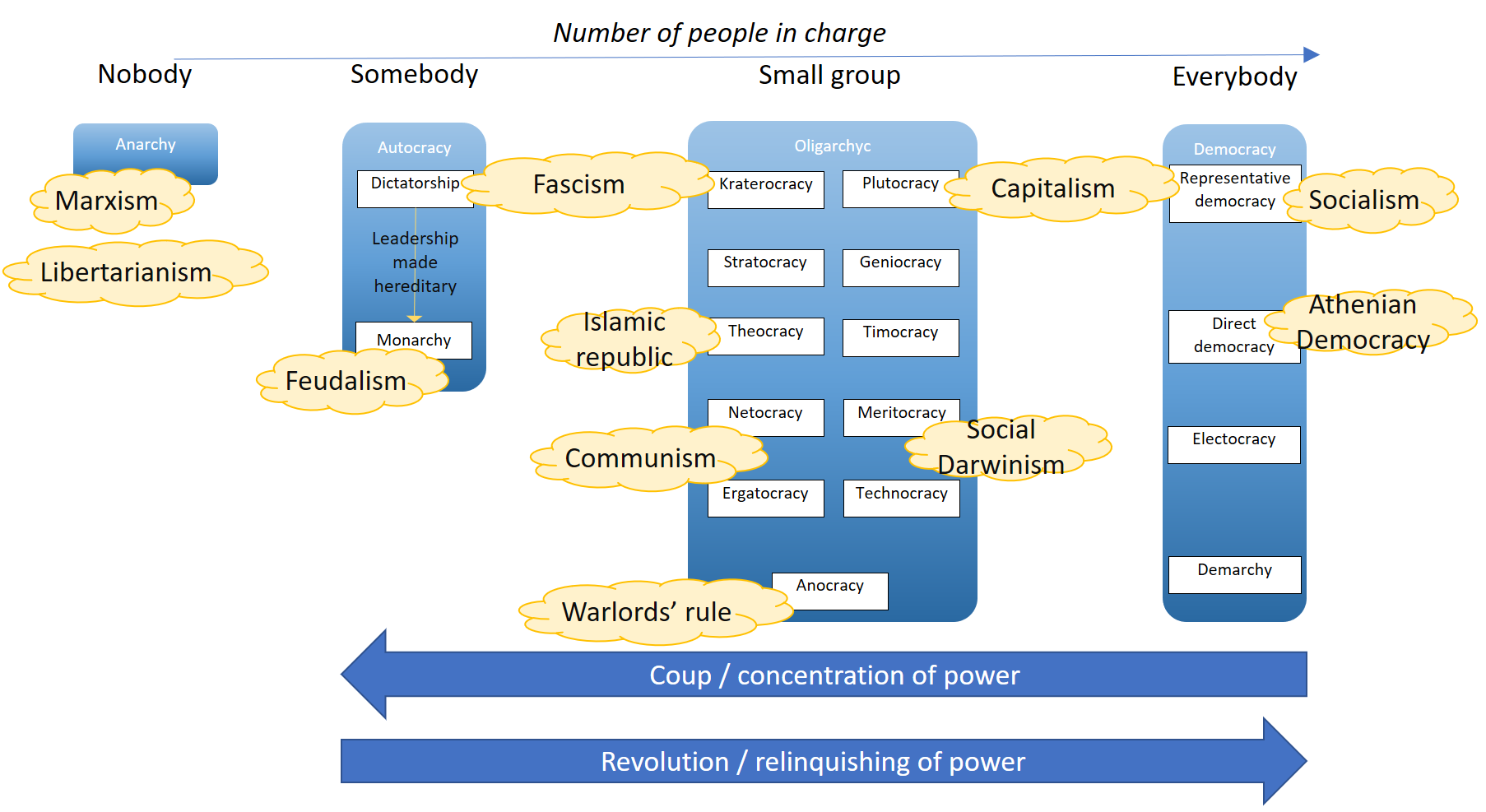 You will note it contains four large groups (blue boxes) and seventeen specific forms of government (white boxes). They’re ordered from left to right by  the number of people in charge.

The orange clouds denote examples of the forms of government the clouds touch. For example, an ‘Islamic Republic’ is an example of a theocracy. The Vatican would be as well, by the way.

The large arrows at the bottom, denote how to get from one type of government to another.

The diagram shows off my nifty diagramming skills, but without explanations of all the specific forms of government, you still don’t know squat. So, first, an explanation of the broad groups.

Anarchy – The first rule of an anarchic government is that there is no government. An anarchy is ruled by no one.

Autocracy – The rule of one. A single person, either a dictator or a monarch is in charge. Think the Emperor in Star Wars, or Hitler in the third Reich.

Oligarchy – A group of people is in charge. A good example is the polit bureau in Communist Russia.

Democracy – Everybody is in control in equal measure.

And then there are the seventeen specific forms of government.

Dictatorship -A government with a single leader: the dictator. Dictatorships can come about through a coup, but also by a strong leader drawing enough power to themselves to take totalitarian control, like Hitler did.

Monarchy – A dictatorship where the post of dictator is hereditary. We all know the kingdoms of the middle ages, but modern day Syria is also a de facto monarchy.

Kraterocracy – A system of government where the strongest or most cunning rule.

Stratocracy -An oligarchy where those who have served in the military are allowed to wield power. Note that this is not the same as military rule, which is more often than not a dictatorship.

Theocracy – In a theocracy, the church runs the government. The Vatican is a prime example, as is the Islamic Republic of Iran.

Netocracy – An oligarchy where the ruling elite are formed by those with the social network to get to the top. Rule by the ‘old boy network’, as it were.

Ergatocracy – A society ruled by the working class. This is one of the end states of society envisioned by Karl Marx, but something that was never achieved.

Plutocracy -Rule by the rich. In this type of oligarchy, those with money have the power.

Timocracy – Those with property get to be in charge, as denoted by Plato himself. This is different from a plutocracy in that you can be poor and still own property.

Geniocracy -An oligarchy of the smart and creative. This theoretical government would put the smart in charge.

Meritocracy – A government where the leaders are elected according to merit. Of course, the question is how to select who has the most merit.

Technocracy -Specific fields are led by those with the most technical expertise.

Anocracy – A country led by a group of warlords in ever-shifting alliances.

Representative democracy – The people select their leaders by popular vote for a period of time. This is the form of democracy we see most in the modern age.

Direct democracy – A form of democracy where the people vote on issues directly. I recently wrote some personal critical notes on this form of goverment.

Electocracy – A (arguably) democratic form of government where people get to vote, but those in power have little else to do with those voting. Representative democracy gone bad, as it were.

Demarchy – People are randomly selected to lead, like jury duty on steroids.

I hope this provides some clarity in whatever political discussions you might get sucked into. At the very least the words are useful in Scrabble.