Alien: Covenant just came out in theaters. Even after my disappointment in Prometheus, I still wanted to see it, hoping it was better than that pile of wasted film. It’s a low bar to set, but can Alien: Covenant deliver?

A colony ship making repairs on their way to their colony world receives a distress call from what appears to be a human woman, originating at a planet that seems far more ideal to colonization than their actual destination. The colonist decide to go to this seemingly ideal planet, where they find aliens and the human android David. Horror ensues.

The story is set ten years after Prometheus, and continues some of the story started in Prometheus. I say ‘some’, because Prometheus hinted at life on Earth being created by a rogue group of Engineers (I refer to these other non-humans as Engineers, to distinguish them from the titular Alien character of all the Alien movies). It also started a story of Elizabeth Shaw going to find these progenitors of mankind.
Unfortunately, it doesn’t really follow through. The conclusion of Elizabeth’s story happened off-screen, and we only get to see the aftermath.

The main character of this movie is Daniels Branson, who loses her husband at the start of the movie and is second in command to the new Captain Oram. She followed her husband to the stars on a dangerous colonization mission, and his death forces her to deal with the consequences alone.

The other main character in the movie is David, the android from Prometheus. Elizabeth reassembled him after the events in Prometheus – which, frankly, flabbergasts me – and now he lives alone on a planet filled with dead aliens.

Then there’s Captain Oram, a religious second-in-command who’s propelled to captain, but who is unfortunately not a capable leader.

Next up is Tennessee, the guy who stays behind on the colony ship while most of the group goes to the surface. He’s a more stable person that many of the others and I was wondering why he wasn’t second in command after Daniels.

And there are a bunch of other characters. The characters aren’t badly written, but not great either. They’re just memorable enough to set up a group of people stuck in a horror movie.

Elizabeth Shaw is on the list, but – sadly – only has a very small part.

The slasher trope that killed Prometheus

One of the biggest tropes of Slasher movies is that the cast get killed off one by one. Usually, those who get killed off have clear flaws or vices that mark them as the next victim. Members of the group being stalked by a killer also conveniently separate themselves from the herd.

Prometheus followed this trope almost to a T. However, the group was not made up of partying teens, but of seasoned scientists. They came across as utter morons as a result. The crown jewels was the map maker getting lost and the biologist fleeing as soon as he ran into something organic.

Alien: Covenant falls into exactly the same trap. The main cast is the crème de la crème of a group of 2,000 colonists. They are the ranking officers responsible for a small city worth of people on a dangerous missions. So after one scan of a planet they decide to change their destination, endangering their mission on a hunch.
Arriving on the planet they decide to forego scanning, quarantine procedures, and even environmental suits, and just land on the planet with their only lander. Then some people wander away from the group, people get infected with alien germs, and it just gets worse and worse from there.

These people are all bloody morons. In the original Alien they were at least a small crew of miners, not scientists or colonists, and they were only responsible for a mining vessel belonging to a corporation they didn’t care for. The colonists in Alien: Covenant are supposed to know better, and come across as inexcusably stupid.

Below the picture is a more spoilerful look at where the movie fails. If you still want to watch it without knowing the plot, stop reading here. 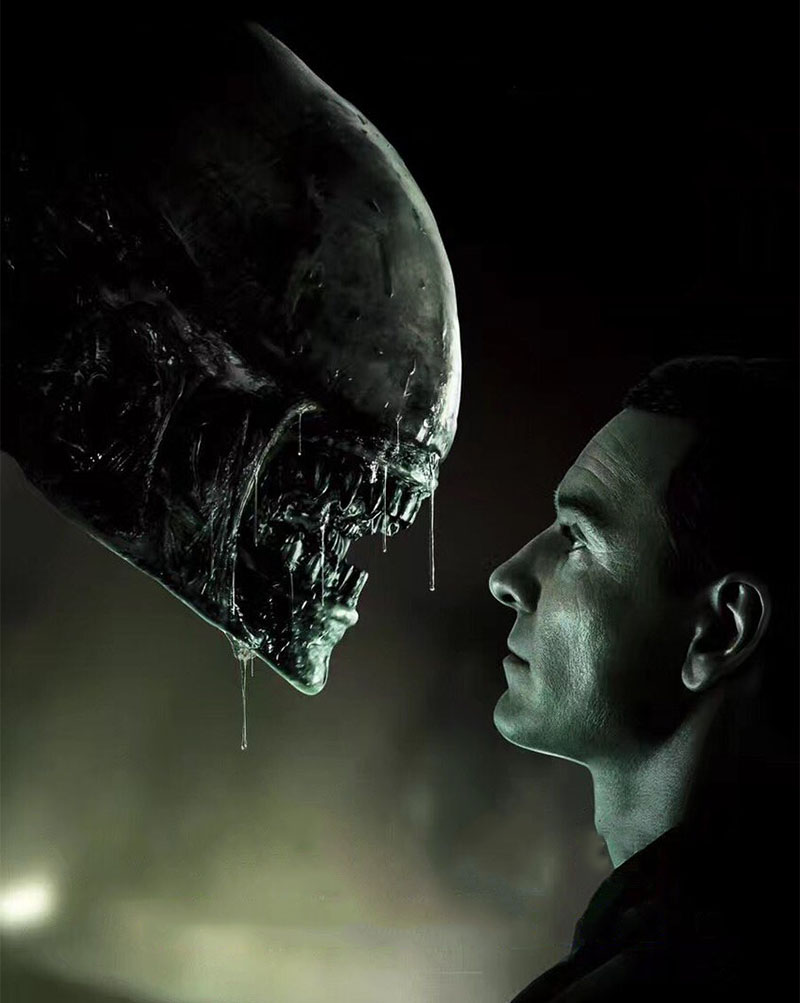 A spoilerful analysis of pacing

To mix a psychological horror with a slasher movie, the story alternates between slasher sections and introspective sections. This really messes with the pacing, specifically the build-up. The original Alien built up this sense of claustrophobia because the characters had no escape. That is missing here.

We see the first alien in the first quarter of the movie. After that it’s just more aliens. The later alien isn’t really scarier than the first one bursting from somebody’s back. So, the horror actually decreases over the course of the movie.

Next up: the infections and face huggers result in aliens in record time. Aside from the plot hole this creates for the chronologically later Alien movie, it kills the tension even more.

You know all those scenes of Androids David and Walter discussing philosophy. That really should have been David and Daniels. Actually, it begged to have been David and Elizabeth Shaw, but that movie was never made.
At the first appearance of David, it would have been much more interesting if he had taken Walter out and replaced him immediately, with only the audience knowing. This would have created far more tension, and all those discussions could have given depth to both Daniels and David.

Secondly, this movie did not need proto-aliens or David killing the Engineers. Both these things confused the story, and tried to add background lore that a slasher movie doesn’t need.
Instead, have the spores infect the crew, slowly killing some of them. Then, Walter (really David) ‘finds’ a city with dead Engineers. He takes the crew there and ‘cures’ them with face huggers.
Only then does a real alien emerge, roughly at the same time as it did now.

These changes would improve both the pacing, the build-up, and more seamlessly integrate the slasher and psychological parts of Alien: Covenant.

I feel Alien: Covenant is roughly as bad as Prometheus. It’s pacing is off, it tries to be two things at once and the characters are unforgivably stupid. That said, the acting and visuals are good and it’s interesting to watch, more so than Prometheus was.