I played through Cognition: An Erica Reed Thriller recently. I have to say, it was an… experience. One that I’m going to share today.

I’m sucker for point-and-click adventures. Gabriel Knight: Sins of the Fathers is one of my favorite games. So, a game that has Jane Jensen – creator of Gabriel Knight – as a story consultant is right up my alley.

First, let me say the art of this game is great. The visuals are well-done – and by the Dutch comic book artist Romano Moolenaar, which is awesome.

The music is extremely powerful – better than what the game deserves really.

Erica Reed is an FBI agent investigating a string of murders. A man called the Cain Killer is torturing and murdering siblings. The story opens with Erica rushing to a Boston graveyard because she has just learned that the Cain killer has taken her brother as well.

A 4-episode supernatural detective point-and-click adventure flows from this premise. Each of the 4 epsiodes has its own story, but builds to the capturing of the Kain killer. I’ll not spoil anything more about that here.

I was intrigued by the plot, and it has some good elements. Ultimately, though, it fell flat for me because of some really bad build-up, unexplained tangles, and really badly explained character choices.

Erica Reed is an FBI agent who doesn’t fit in well. It turns out she has psychic powers, and she has to come to terms with that. I’ve also concluded she’s bipolar and very bad at her job. The bipolar part can best be illustrated by a scene from the prologue of the game. Out of nowhere, Erica pulls a loaded gun on her partner/mentor because he’s trying to talk sense into her. She reminds me most of  Carrie Mathison in Homeland, but of course, that character has bipolar disorder.

Luckily for Erica, her co-workers are even worse. There’s her partner John, who doesn’t seem to do anything but eat donuts. There’s her bosses Davies and McAdams, whose personalities can best be described as ‘angry boss stereotype’. Then there’s Rose, the wise mentor, whose wisdom mostly consists of ending each sentence with ‘my dear’. Finally, there’s Terrence the stereotypical nerd forensics guy, and Gallagher, the stereotypical pathologist-with-a-stick-up-her-ass.

These characters don’t appear to be there as characters. They just provide the opportunity for a quick joke, or a puzzle to solve.

The only other character with a personality in the story is Cordelia, but unfortunately that personality is… okay, I need a spoilerfilled section for more about her.

When you make a story with an FBI agent solving crimes, you’re pretty deep into ‘police procedural’ territory. That means that the FBI procedures should feel authentic, or at the very least make sense in the story. Unfortunately, they don’t.

You know how in CSI they always walk around in their normal clothes at a crime scene? That’s not normal. Crime scene technicians wear protective clothing. Since CSI does it, we can let this slide for cinematographical reasons. However, agents pocketing evidence, without  gloves, and not even contacting a forensic team, is hard to look past.

Actually, in the Erica Reed universe this isn’t even the biggest problem, since the evidence is stored behind the reception desk anyway, and guarded by the receptionist. You know, ’cause of paycuts.  The same pay cuts that annoy the forensic analyst and forensic pathologist so much they refuse to do their jobs properly.  Not that anybody will notice, because case files are woefully sparse, and not even available until the agent in charge decides to upload them from their desktop several weeks into the investigation. Should anything come to light, don’t worry, the boss signs all papers without looking, so back-dating things shouldn’t be hard. And let’s not even talk about the way they do an autopsy.

This is all especially good for our protagonist, because she not only disobeys orders, she also doesn’t shy away from breaking into her boss’s office, hacking FBI computers, and  stealing evidence. Of course, breaking and entering is right up her alley, as is blackmail, and falsifying official documents to help out a friend. I mentioned she pulled a gun on her partner already, I think. Oh, and I nearly forget, she steals flowers from people’s graves. Don’t worry, she actually feels slightly embarrassed at that last one.

All in all, the police procedural part of the game is so terrible it’s laughable.

Below I’ll discuss some of the game more in-depth. That will contain spoilers. If you don’t plan on playing the game, or already did, read on. Otherwise, Stop reading now. 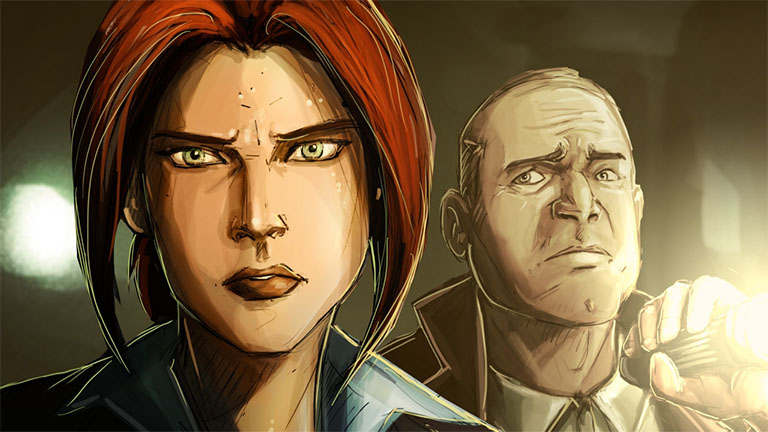 I think I’ve covered the basics of what is wrong. But the plot and its relation to the characters is nearly as bad. Let’s look at what happens in chronological order (because the game is pretty complicated in its timeline).

Cordelia, Keith, and Max are three siblings whose parents die. It turns out the family fortune was left to Keith only. The siblings decide to stick together and build an apartment building together. It’s apparently a very revolutionary building, designed by Keith, but there is no real explanation of how.

The family lawyer Skorobeus and Max do something clandestine to fund the towers, somehow related to Keith’s inheritance. It is never made clear what, or how it works, but the FBI comes a-calling as a result. It turns out it’s Erica Reed’s bosses Davies and McAdams. I would ask why agents normally dealing with murders handle this, but apparently they do.

Cordelia turns out to have visions of the future. She has one of Max being shot. Oh no. Luckily, there’s those two FBI agents. She tells them this pretty crazy story and they do what you might expect: disregard it. However, it gets worse, and this is really the point where things go off the rails.

Non-professionals that they are, Davies and McAdams actually laugh at Cordelia to her face. They also refer Cordelia to John, Erica’s future partner, because ‘he might believe in such shit, ha, ha’. Cordelia takes that remark seriously and goes to see him, but he really can’t do much either except refer her to Rose. Rose who doesn’t do anything but ‘my dear’ her as well. The question that bugs me the most here: why the f*ck doesn’t Cordelia come up with a more rational story? Or call in an anonymous tip? Anything is better than what she actually does. I mean, telling two officers coming to search your house such a story. Who believes that will work?

Meanwhile, Max finds out the truth: Keith is only their half-brother. The family lawyer Skorobeus is his real father. Skorobeus faked the will so that only Keith would inherit. Also… Keith’s real name is somehow Jeff Therien. For reasons never explained. And there is a fake death certificate for him. For… reasons. Max confronts Skorobeus, who then beats Max unconscious. Keith shows up and learns the truth as well. This somehow makes him go completely off his rocker and he decides that Max and Cordelia should pay. Again, very weird reaction.

Okay, now for some more weird developments. Keith decides to force Cordelia to shoot Max in the head. She does, while Max asks her to bring the killer to justice. First off, he fails to mention that Skorobeus knocked him out. Second he doesn’t tell her Keith isn’t her brother. Heat of the moment thing, I guess. Of course, Cordelia learns all this anyway, from future-visioning Erica figuring it all out.

And now comes the kicker: she hands herself over to the FBI and admits she murdered Max anyway. To protect Keith and punish herself for killing Max. Apparently. The FBI (Davies and mcAdams again) swallow her story whole and she’s carted off to jail. WTF? I mean, really? This makes no sense at all.

In the next three years, Keith goes on a killing spree. Cordelia is finally released when the evidence mounts of a serial killer that can’t be her. McAdams, Davies, and John decides to cover it all up, because they made a mistake. Again, WTF? Why cover it up? There was a lot of evidence and she made a confession without hesitating. What did the FBI do wrong? Well, okay, they could have realized that a woman so clearly in utter shock might not be very reliable. But really, would you risk your career by covering that up?

Next up, Keith takes Erica’s brother. Cordelia tries to save him (we learn from the end of episode one that Cordelia was there). Whoops, she fails. Cordelia tracks Keith down. Instead of turning him in, or killing him, or anything sane, she captures him and locks him in the secret basement of the Enthon towers for another couple of years. Again… WTF?

Cordelia then starts to get revenge on Davies, McAdams, and John for not listening to her insane story. She kills a whole bunch of people to do it, too. This reaction of hers is completely over-the-top insane. Seriously, you blame the FBI agents for not believing your insane story when they come to investigate your brother for fraud. Really? And then you think up a seriously over-complicated vengeance plan, involving the killing of several people and the mutilation of another FBI agent.

But it gets worse. All of it was part of Cordelia’s future-vision-driven plan to get Erica in the picture so she could kill Keith. Yeah, because her conscience can take the murder of some five people, but not the murder of the brother that forced her to kill her other brother. Wow, good plan, great character motivation.

But it gets even worse than that. The convoluted plan fails because Erica doesn’t call backup for the gazillionth time and then accidentally shoots John. And it turns out, it was Keith manipulating her all that time. Whoops. On a side note, John has no other function in the story besides getting shot by Erica. He’s the girl in the fridge.

So, future plan fails, and Erica and Cordelia finally go after Keith together. After Rose tells Erica to help Cordelia because ‘it’s her goal in life’. Again, there’s a convoluted plan, no backup, and the end-result: Keith and Cordelia both die. Cordelia, your knowledge of the future was really, really freaking useless. And Rose, you really suck at your life’s goal.

Okay, so that’s a lot of plot fails. If you look at the way that these plot points are structured, it gets worse.

The first two episodes build up okay, but Keith and Max only appear in episode three. They’re like rabbits pulled out of a hat – a bad way to introduce the true villain. Rule one of writing a detective: the reader (player) must be able to figure it out themselves. And that is impossible if the actual killer is only brought on stage halfway through.

Episode three not only establishes the character, but also reveals who the killer is, skipping to the climax and leaving the fourth episode a dangling mess.

Episode four is mostly about Keith and Cordelia, but both of these characters are incomprehensibly insane. Not sympathetic-I-feel-sorry-for-them insane, no things-didn’t-go-their-way-so-they-went-on-a-killing-spree insane. Both of them. Cordelia’s personality is somewhere between a five-year-old and a serial killer, and Keith is somewhere between the main characters from Rain man and Saw. Those two spending scene after scene trying to rationalize their actions to each other while sticking to their insane decisions is… painful to watch.

All in all, Erica Reed is an good-looking game, that has its moments, but it also has truly abysmal writing.