The Last Witch Hunter was released at the end of last year. It currently holds a 6.0/10 rating on IMDB and is generally regarded as a bad movie. Is that deserved, and if so, what could have been done differently? Like a promised last week, let’s have a look.

That’s what most of his recent movies try to project anyway. Riddick is all about how cool Riddick is. And The Last Witch Hunter is about how cool Kaulder, the main character is. The movie seems to be going for a blend of Highlander and James Bond, but it’s being laid on way too thick.

Kaulder in the Last Witch Hunter is based on a D&D character Vin Diesel played, and I think translating him to the big screen might not have been the best idea. Kaulder feels like a Marty Stu.

Kaulder starts as a Witch Hunter in the middle ages, with a viking look as shown above, hunting down the witch that killed his family. The mighty Kaulder stops her and  incidentally the black plague she unleashed. As she dies, she curses him to eternal life.

Skip to the present. Kaulder is still a bad ass Witch Hunter, but also very rich and wise, and working for a modern-day witch hunter organization. He drives around in a fancy car and has a cool penthouse with a walk-in weapon closet.

Like I said, Highlander meets James Bond. With magic. Unfortunately, Diesel is missing the mark. He might be able to pull off dark and broody, but not depth. I do truly wonder what Michael Fassbender could have done with this one, or Christian Bale.

The Last Witch Hunter misses the mark on a lot of things, unfortunately, not just on the main character.

The plot is not bad, but pretty confusing, and too predictable. I didn’t notice any major plot holes, which is good, but the writers crammed just a bit too much in there. Chronicles of Riddick suffered from a similar affliction, actually.

The worldbuilding is nice, and the vibe that the director seemed to have been going for was the same as Guillermo del Toro managed in Hellboy 2. However, this was not del Toro’s work, and it fell short of that mark.

The characters are mostly pretty cliché. Michael Caine and  Elijah Wood are good actors, but they seemed to have had too little to work with. They play the 36th and 37th Dolan – that’s a job title – but there’s little going on there. Michael Caine is playing Batman’s Alfred  again, and Elijah Wood is… a guy in a priest suit.

The characters Chloe, Baltasar, and the witch are the exceptions. Rose Leslie plays Chloe. Her character does have depth and it shows. Ólafur Darri Ólafsson plays Baltasar, a bad guy witch. He does this well. Vin Diesel and he could really do a brood-off and it would be too close to call. I found the character convincing, although lacking depth as well. The witch herself – Julie Engelbrecht – is also well done, even if she only has a relatively small role.

There are some things that could have made this movie better. My take on that will mean some spoilers, so I’ll continue beneath an image of the evil witch. 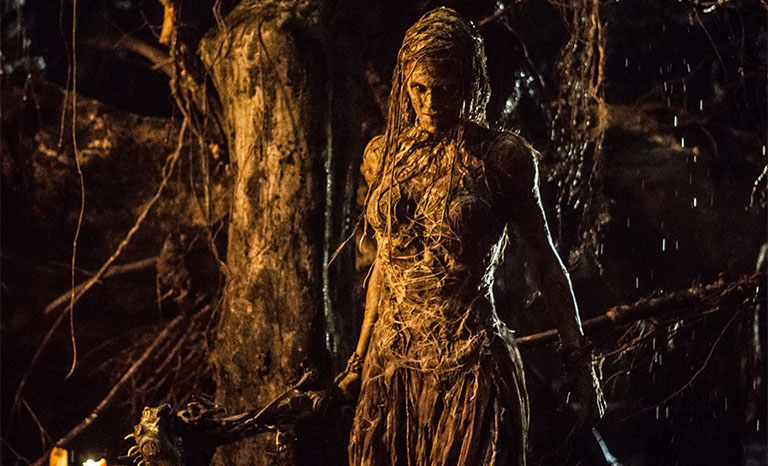 How to fix this movie then? I’m not expert of course, having never made a movie, but I do know a little about writing and pacing.

The core of the plot is that Kaulder was actually made immortal by the witch to save her own skin.  The Witch hunter organization has secretly been holding the witch’s heart so Kaulder would keep fighting. I like that core plot, but then another plot was added about Dolan nr 37 replacing the old Dolan nr 36. And another plot about Dolan nr 37 betraying Kaulder because Kaulder killed his parents. And one about the bad guys almost murdering Dolan nr 34. And one about the girl Chloe helping Kaulder remember his past. Oh, and the witch caused the black plague and wants to infect the whole world with it. And… It’s too much.

The plot could have been simplified a lot by removing Michael Caine’s old Dolan character. The hook could have been Dolan 36 being found dead after he’d told Kaulder he needed to tell him something about his past and the witch. Dolan 37 shouldn’t have been betraying anyone because of his parents. No, Dolan 37 should have been a company man through and through, only the company (the witch hunter organization) doesn’t have Kaulder’s best interests at heart. So, without all that extra confusion we have the bad witch trying to find her heart and Kaulder trying to find why his old Dolan was murdered and needing Chloe for that. His own organization betraying him is still a good twist. Simple, but enough to fill a movie.

The second major problem with the movie is that Kaulder is too bad ass and the build-up around his character is paced wrong. He needs a flaw and he needs to be set up differently. Enter Chloe. She’s an interesting character.

Let’s go with that and see what we can come up with.

Scene 1: we see Dolan 36 present at a fight between Kaulder and a bad warlock. This can show off Kaulder’s coolness in a more aloof way. Kaulder beats the warlock, and Dolan 36 tells Kaulder there is something he needs to know about his past. It is established here that Kaulder is 800 years old. Kaulder claps him on the shoulder, but says he’ll first turn in the warlock. Queue a shot of Baltazar watching the whole exchange from a distance, looking ominous.

Scene 2: we see Dolan 36 in a bar, meeting another man. We see a first shot of Chloe. They sit down to discuss ‘telling him’. End scene.

Scene 3: Morning. Kaulder is bent over the dead body of Dolan 36. He looks pained. He heads off to the bar where Dolan 36 was known to have been last. We meet Dolan 37, who happens to be the man Dolan 36 was meeting in the bar. Kaulder and Dolan 37 go off to the bar.

The rest of the movie can go from here. They meet Chloe at the bar and about the same that happens in the original movie can happen here.  The biggest differences are that we know far less about Kaulder up front, and his past can be slowly unfolded, possibly as part of Chloe looking at his memories. The story adds more tension about Dolan 37, and ties it into the main plot without all the added subplots.

This can also lead to a much tighter climax about Kaulder facing the witch and his own employers.

Okay, that’s my take on it. The movie was okay. It’s a pity it’s not better, it had a lot of potential. I hope I’ve shown how it could have been better.

There are other ways to solve this of course. If you can think of some, drop a comment.