The Librarian is made-for-TV movie from 2004. I bought it years ago, as part of a five-movies-for-four-euro set. Last week, I finally got around to watching it. Here’s what I thought about it.

Flynn Carsen – played by Noah Wyle – is a thirty-year old who has never left college. He already has twenty-two degrees, but doesn’t want to quit college life. He lives with his mother, who tries to set him  up with a nice girl. At the start of the story we see him with one such girl, who doesn’t want to have anything to do with the creepy man living with his mother at thirty.

Flynn decides he’ll get a job. Coincidentally, he gets an invitation to apply for a position at the Metropolitan Public Library. He applies, pulls a Sherlock-style analysis of the interviewer, and is immediately hired as ‘the Librarian’.

Contrary to what you might think, ‘the Librarian’ doesn’t actually guard books. He is in charge of all kinds of supernatural stuff held at the secret library.

And can you believe it? That same night, a group of villains breaks in and steals part of the Spear of Destiny. Flynn is charged with retrieving it.

Would you sympathize with a man who lived with his mother until he was past thirty? Who is in college, but doesn’t want anything to do with his fellow students? Who apparently spends a fortune getting degree after degree? No, I really can’t sympathize with the guy either. He’s a lazy jerk.

Then there is the female lead, Nicole Noone, played by Sonya Walger. She can best be described as an overbearing, stuck-up bitch. She’s the proverbial fighter-chick. Unfortunately, as soon as she comes on screen she looks at Flynn and shoots him down because she’s ‘way out of his league’ while all he did was greet her. I really can’t sympathize with her much either.

The bad guy is Edward Wilde – played by Kyle MacLachlan. He’s the leader of the Serpent Brotherhood and wants the Spear of Destiny for himself. Hitler had one of three parts of the spear, but Edward wants all three. For… reasons.

All in all the characters are all pretty crap. They could have easily been set up much better, with only minor tweaks to the script.

I wrote a post on the hollywood formula a while back. This movie clearly tries to follow it all the way. I didn’t hold a stop watch to time it, but the elements of the formula are all there. At times it seems cramming certain elements into the movie is far more important than actually telling a coherent tale, with coherent characters.

All in all, it’s not a bad movie, but not a very good one either. Let’s have a more spoilerful  look at the movie below. 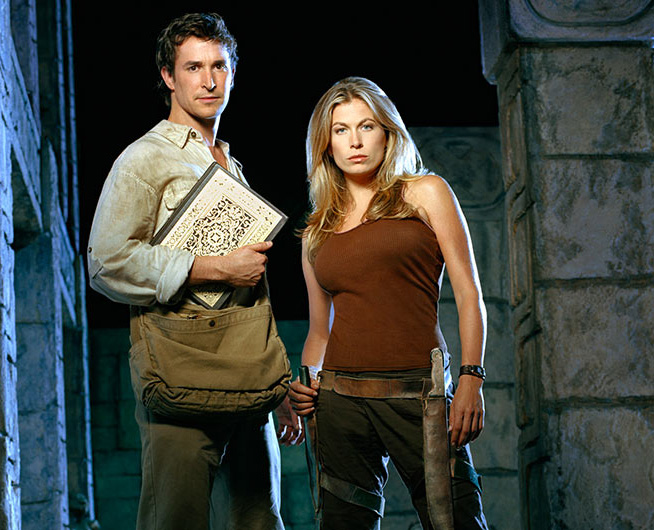 A spoilerful look at Edward Wilde

A big gripe I have with the movie is the villain, Edward Wilde. The guy checks a lot of boxes on the ‘don’t’ list of villain writing.

He’s become evil… because. Not a clear reason, just that power gives him a boner (I’m paraphrasing, but this is what he actually says). Why? What does he have to gain? When he finally gets the whole spear to work what is he planning to do with it? Get a bigger boner by ruling the world?

Mistake two was treating his henchmen like crap. As soon as he has the spear he uses it to kill his right-hand man. Way to go for loyalty, mister Wilde.

The thing is, he used to be the Librarian. He faked his own death, then turned around and broke into the library to steal the spear, then went into full evil mode to find the other two pieces. Why the heck didn’t he steal the bloody spear-part when he was still working in the library? He had unfettered access already. Why did he fake his own death? It would have been far far simpler to become leader of this serpent brotherhood while remaining to be the Librarian.

Finally, he was pretty crappy as Librarian, apparently. Newby Flynn manages to do a far better job at librarianing than Wilde did. It seems that Wilde was only good at boning the female lead.

My other big gripe is that the movie fails spectacularly at the Bechdel test. As a way to judge the sexism of movies, the Bechdel test isn’t a perfect tool, but it is a good starting point. The test is simple: does the movie contain a scene with two women in it talking about something else than a man?

In the Librarian, there is only one scene with two women in it: a climactic fight between the female lead and the female bad girl. During the fight they bandy words. What about, you ask? How much they love the Librarian, of course. Yep, it seems specifically designed to give the finger to the Bechdel test, but that might be my interpretation.

Nicole Noone is actually a reasonably strong woman. She saves Flynn from death on several occasions and generally knows what she’s doing. Unfortunately, she falls in love with him, as she did with the previous Librarian. Her world evolves around Librarian men, apparently.
I get the boyhood fantasy thing, but is it really necessary for her to fall for both librarians? And is it required that the female bad girl falls for him too?
And the big one: if you look at the first Librarian, why didn’t miss Noone become the new Librarian? She seems way more qualified for the job than Flynn. Is it a male-only job?

The Librarian is a fun movie, if not a very good one. The less than a euro I paid for it was worth it, at the very least. I am wondering if I want to watch the sequels. Or the TV series.