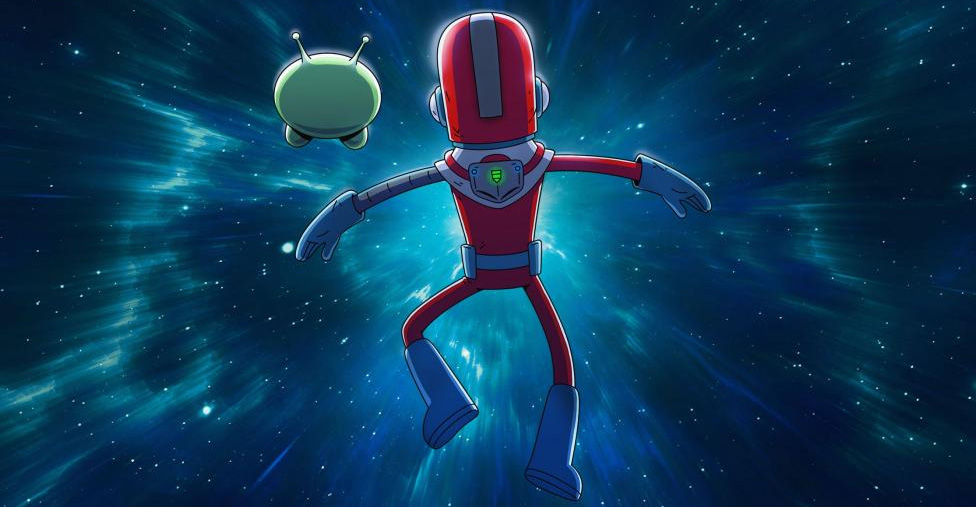 Final Space is a space opera adventure mature comedic cartoon. Yep, that’s a mouthful, but I stand by that assessment.

Gary is a convict, his five year prison sentence on the space ship Galaxy One almost over. He is all alone on the ship, sentenced to space labor, his only companions a robot called KVN (pronounced ‘Kevin’) and the AI captain of the ship: HUE (pronounced ‘Hugh’).

He encounters a mysterious alien. Gary dubs the creature ‘Mooncake’ and they become friends.

Then bad guys arrive and try to retrieve Mooncake for their evil master. Things quickly escalate from there.

Gary is an anti hero who starts out oblivious of those around him, living in his own narcissistic world. He slowly grows on you, though, and by the end of the show you get to see his hidden depths.  It’s not perfect, but the way Gary is portrayed is pretty good writing.

Mooncake is a cuddly alien who can’t talk. Mooncake is basically a big green smiley face. In spite of this, the writers/animators manage to instill Mooncake with character. This is also quite the achievement.

Then there’s Avocato, a cat man lieutenant of the bad guys. I’ll not spoil his arc, but it’s not what I would have expected in a cartoon.

Finally, there’s Quinn, Gary’s would be love interest, who is a hero of the Infinity Guard, the protectors of Earth. She’s… well, her arc is somewhat strange — yeah, time travel is involved — and I’m not sure if I thought it was good or not.

A good way to get viewers to love characters is through humor. The humor in Final Space reminded me of Futurama, which is a good thing. Interestingly, the show also turns much darker, and piles on the drama. This drifts into melodrama a lot, but that’s part of the joke. For me that worked.

I’m not good at suspending my disbelief when things make no sense. However, when the absurdities are couched in humor, I’m apparently more willing to give it a pass.  The show has a number of large plot holes in it, one of the bigger ones being that Gary is somehow imprisoned in one of the most advanced warships in the galaxy. For once, I could get past those holes.

The show tries to pull at the heart strings as well. You can clearly see many of these moments from a mile off. The situation escalates and characters suddenly find themselves in terrible danger, only to be saved by one of the others having an epic moment. It’s terribly cheesy, but the fast-firing gags and snappy one-liners pave over these imperfections nicely. At least for me.

I really liked Final Space, but I’m quite sure a lot of people will hate it. It’s not actually that deep and it strays into melodrama territory.

Still, it’s great fun and a thrilling ride. That is, if you like humor like in Futurama or the Simpsons. If you do, go watch this show.