Rogue One is the Star Wars movie of 2016, a product of Disney’s deal with George Lucas. I finally got to see it last week, so I’ll put in my two cents now.

With Disney buying the Star Wars franchise from Lucas, there will be a steady stream of new Star Wars movies. Aside from Episode VII, VIII, and IX, Disney has planned a number of spin-offs. Rogue One is the first of those.

Rogue One is set between episodes III and IV. It’s a prequel… sequel… in-quel? It tries to fill some of the hole between the third and fourth episode.

In a similar vein, a young-Han-Solo movie is coming in 2018, and maybe a Boba Fett movie after that. Personally, I don’t really see what a Han Solo movie or a Boba Fett movie will add; the first will probably explain how Han got involved with Jabba the Hut, why Chewbacca is with him, and how he ‘did the Kessel Run in less than twelve parsecs’. The story of Boba Fett… I suppose it will give us a view of the bounty hunter society in Star Wars. That’s my guess anyway, and I’m not filled with excitement yet.

Then again, I didn’t see what Rogue One would add, and that turned into a great movie.

Rogue One starts out on a desolate world, where a family is apparently farming in the wilderness. An imperial shuttle arrives, to take the family away. The father – Galen Erso – is a brilliant scientist, and the empire wants him to work on a new weapon. They intend to use his wife and daughter as collateral against his cooperation. His wife resists and gets shot, after which his daughter Jyn flees and hides until she is found by Saw, a friend of the family.

Fast-forward fifteen years. The rebels bust the now grown-up Jyn out of an imperial labor camp. They need her to contact Saw, because the Empire is rumored to have a new Weapon of Planet-Destruction ready. Yes, it’s the Death Star.

The story of how the rebels manage to get the Death Star plans flows from here, and eventually into episode IV.

The movie has quite a large cast of main characters. There’s Jyn Erso, Cassian Andor, K-2SO, Chirrut Îmwe, and Baze Malbus on the light side. And Darth Vader, Governor Tarkin, and Director Orson Krennic for the dark side. This puts quite a lot of pressure on the movie. You can only do so much in two hours, especially if it’s a Star Wars movie where part of that time is used for space battles and shots of Star Destroyers.

Given the constraints above, the writers and director did well. The movie comes together quite nicely, and the ending is awesome. It does take some time to get invested, though. I’m a huge Star Wars fan, so I was just happy to see a good Star Wars movie – the trauma of Episode I,II, and III has yet to fully pass.

On the other hand, I can understand why this puts some people off. Without background knowledge, you’re head will be spinning the first half hour.

All in all, the characters are not as fleshed out as they could have been, and there are some issues with how they are presented. I’ll look at that in the spoiler-filled part of this review below the image. 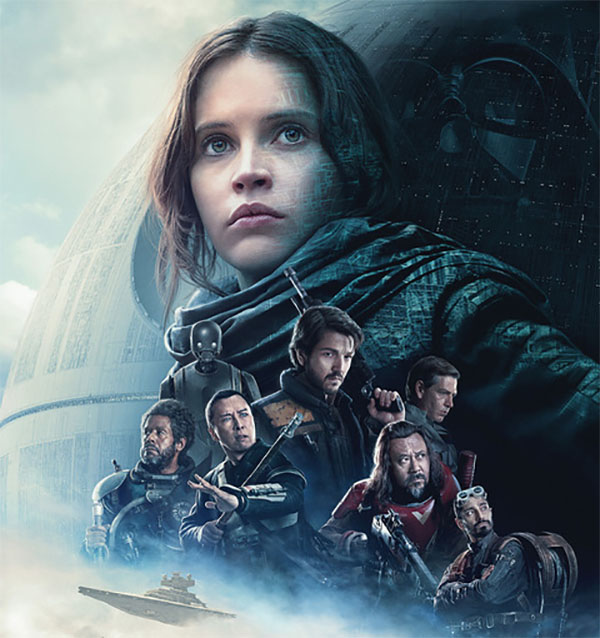 In the last hour of the movie, I started to wonder what would happen to all the main characters. They would be heroes of the rebellion, but they are not in episodes IV, V, and VI. That was quickly answered when they started to die off one by one.

I found it delightful – if heart-wrenching – that the writers had had the guts to set up a cast of characters to then mow them all down at the end of their suicide mission.

However, I feel that does cause some problems with the character-arcs of the two protagonists, Jyn and Cassian.

Jyn lost everything when her family was torn apart by the Empire, but instead of fighting back she just runs and stops giving a crap. During the story she finds a new place for herself and the strength to fight for a cause.

Cassian too has lost everything, although we never learn what. He has committed atrocities in the name of the rebellion and in the course of the story learns not to follow orders blindly.

The end state for both of these characters: a tragic death. Now, I can enjoy a good tragedy. However, a good tragedy usually starts with the protagonist(s) flaw, or a mistake which causes their eventual downfall. MacBeth, for example, is brought down by his own ambition. Jyn and Cassian, though, die because the Rebellion and Empire screw them over something good. The same goes for the supporting characters.

The second problem I have with the characters is that their introductions are messy. We don’t get a feel for Jyn’s or Cassian’s character until half-way through the movie.

There are also two subplots which truly confound me.

First, why does the rebel general order Cassian to kill Galen Erso right out of the gate. This is not so much a plot hole, as a writing mistake. It would have been much more dramatic to put this order in the scene where Cassian contacts the rebels after leaving Jedha. That would cause a raising of the stakes at the point where it makes sense.

The second problem is the weird subplot about the Rogue One team trying to contact the rebel fleet to have them bring the planet-wide shield down. In fact, the rebel fleet had been doing that from the moment they arrived. What was that about? It got three of the characters killed, and was actually unnecessary.

All in all, I still loved this movie. It was a darker chapter in the Star Wars franchise, putting it close to my personal favorite episode: the Empire Strikes Back.