I saw The Force Awakens, and now I’m going to write about. Images are from Lucasfilm.

Can I talk about Star Wars: Epsiode VII without spoiling it? Not really.

I’ll write a spoiler-filled review after a picture of the main character Rey (played by Daisy Ridley), below. If you were unaware she was the main character, then you’ve managed to avoid most social media regarding the new movie. Good for you, but this is one thing that you should be aware of, I believe.

I think it’s refreshing to see a science fiction movie with a female lead and a strong male support (Finn, played by John Boyega). The only other movie that springs to mind is Mad Max: Fury Road. And there, Furiosa is only unofficially the lead.

On to the more spoiler-filled part. 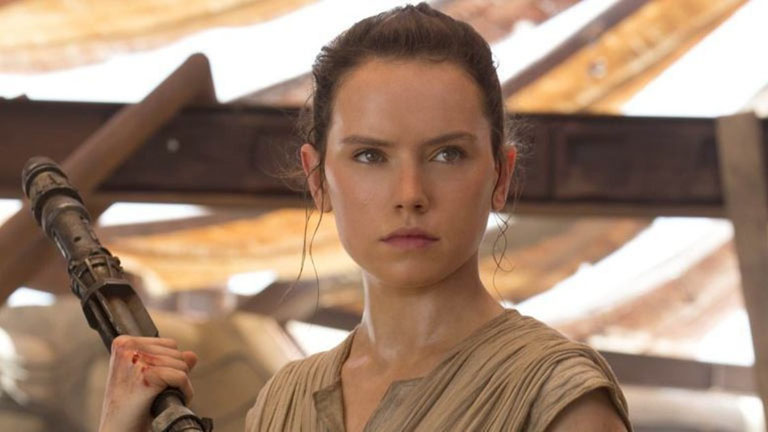 Let’s talk about the elephant in the room. The Force Awakens is a lot like A New Hope. And by ‘a lot’, I mean a lot.

Whether that is a problem is a wholly different matter. James Bond movies are also all structured the same way. When is a Star Wars movie ‘too much’ like another Star Wars movie? You could even argue that this was the only way that fans would appreciate a new episode. With the mess of Episode I, II, and III still a fresh wound to many of us, a new Star Wars movie would have to go back to its roots. And it did.

I also find it strange that something has to bring a lot of new things to the table to be good. Making the same movie twice is not the way to go, of course, because then you can just watch the original again. But this obsession with novelty seems to go too far in the opposite direction. What you need to do is take the plot and setting elements of a movie; the things that make it good. Then add new character arcs to make it fresh. And that is exactly what was done with the Force Awakens.

The things that are the same are the plot and the trappings. Yes, the movie starts out with a battle where a droid escapes with vital information. Yes, the main character lives on a desert planet and is accidentally dragged into an adventure and turns out to be strong in the force. And yes, there is another (sort of) Death Star, and they can blow it up by flying an X-Wing through a trench and shoot the heck out of an integral part. However, Rey is not Luke and Finn is not Han Solo. The characters are very different, and the conflicts that hold up this movie are very different from A New Hope.

Luke was bored with his life as a farmer and chose to go on an adventure with Obi Wan Kenobi when adventure came calling. He wants to be a hero, and by accepting the Force and his heritage, he becomes one. Rey was abandoned on Jakku and is desperate to stay there until those who left her return. She is looking for a substitute family and accepts the Force to save and avenge that family, and in the closing scene is rewarded by meeting a wise father figure.

Han Solo was a scoundrel, in it for the money, but he decides to do the right thing in the end and comes to Luke’s rescue. When Finn sees his companions murder the inhabitants of a village, he finds the strength to turn his back on the First Order and he starts running. He runs because of fear, but eventually conquers it. In the end, he does the right thing and comes to Rey’s rescue.

Where things are really different is with Kylo Ren. As an antagonist he is very different from Darth Vader. In A New Hope, Vader is portrayed as the failed apprentice of Obi Wan who betrayed the Jedi and killed them. Similarly, Kylo Ren used to be Luke’s apprentice and he part of betraying Luke’s Jedi school. However, Kylo Ren is also Ben Solo, Han and Leia’s son. During the movie we see him struggle with the Dark Side. His rage often gets the better of him. Vader was scary. Kylo wants to be scary. He uses a mask to pump himself up. Vader was already lost to the Dark Side before A New Hope began and had no arc of his own (that came later). Kylo has the arc of the ‘classical’ villain. When push comes to shove, he is forced to choose between a life of struggle against the Dark Side, or the ‘easy’ way out and the peace of embracing oblivion. He kills his own father so he doesn’t have to be the son of the General and the Hero any more. It’s the kind of arc that should have been the meat of Episode I, II, and III, but wasn’t.

A New Hope was the classical coming-of-age/hero’s journey, and so is the Force Awakens, but here the characters are made to flounder around. There is no wise mentor like Obi Wan, and the characters have to find their own way. Finn and Rey find their own strengths, and Kylo Ren falls to darkness. If anything sets The Force Awakens apart from A New Hope, it’s these differences in characters and their arcs. It’s very neat triplet of origin stories, within the frame of the plot of A New Hope and set against all the familiar things from the Star Wars universe.

The wheel within a wheel

One other interesting thing to note is the way the movie ends. The movie is about a new generation of heroes and villains arising. The plot follows the hero’s journey structure. However, the movie also ends with Rey accepting Luke’s lightsaber and seeking him out. This is the ending of an act 1, where the hero accepts the call to adventure and meets a mentor to guide them on their way.

This is a very elegant set up. The plot follows the hero’s journey, giving it a clear climax and closure, but in the larger scheme of things it is only the end of the first act. A New Hope wrapped things up, but without that extra act 1 ending. It left the road to sequels open by letting Darth Vader survive, but that was it. Of course, it was far from sure there would be a sequel when A New Hope came out.

There are people who don’t like Star Wars. I do. I loved it the first time I saw A New Hope and even more when I forced my dad to rent the other two movies the day after seeing it – yes, there were only three then, and still rentable on VHS. I hated the prequels, and I don’t like how George Lucas messed with the original trilogy later. That’s an opinion. If you don’t like Star Wars, fine. You’ll probably not like The Force Awakens.

I liked The Force Awakens. It’s a space opera built around the hero’s journey, and it’s executed well. So yeah, there are a lot of potential plot holes, but they are not about vital parts of the stories. I personally hate plot holes that touch on character motivations (idiot plotting), and scientific mistakes. So, Rey mysteriously speaks Wookie, is that essential to her character or decision-making process? In Episode III Anakin joins Palpatine to save his wife and five seconds later Palpatine admits he was lying, but Anakin just shrugs that off. Now that is a plot hole.