The light barrier is a big hurdle to interstellar travel. The maximum speed of the universe is the light speed. At that speed, even the nearest star to us is over four years away. That really puts a barrier between us and our interstellar ambitions. I’ll try to explain how this barrier works.

The speed of light in vacuum is 299,792,458 meters per second. In other words, a beam of light in space travels nearly 300,000 kilometers every second (or 186,000 miles). This is not a new scientific find. Since antiquity, some have argued that light has a finite speed. Then, in 1690, my countrymen Christiaan Huygens came up with a first estimate of that speed based on the size of the earth’s orbit and the difference in duration of Io’s orbit around Jupiter over the year. For a few centuries, we’ve known that light has a finite speed.

At the beginning of the last century, Einstein came along. His famous theory started with the assumption that laws of physics are invariant under all frames of inertia. This is quite a mouthful. Let’s break it down: ‘frame of inertia’ is a way of saying ‘how fast are you moving’. That the laws of physics are ‘invariant’ means that the same equations apply.

In other words, no matter how fast you’re traveling, the formulas in physics should keep working. And one of those laws of physics says that the speed of a massless particle in vacuum (like photons, or ‘light’) is a constant. This means that a consequence of Einstein’s assumption about inertial frames was that the speed of light is constant, regardless of how fast you are moving.

“Wait a minute,” you might say, “what about if I am standing still and somebody is in a moving car. If we both look at the same beam of light, it can’t move away from us both at the same speed.”

Actually, that is exactly what happens. The reason for this is a little complicated. Einstein’s theory about the constant speed of light necessitates that something else than the laws of physics changes from one inertial frame to the next. That something is time. Differences in speed result in time dilation.

The amount by which this happens can be calculated using the Lorentz factor, named after the man who thought it up – another Dutch person, as it happens.

Where does the light barrier come in?

The faster you are moving relative to something else, the bigger the time dilation. The lorentz formula is as follows: 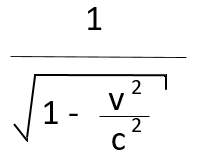 Don’t be scared, only some basic math is needed. V is the relative speed at which you’re moving. C is the speed of light in vacuum. At low speeds, V-squared divided by C-squared is practically zero, meaning the Lorentz factor is only slightly above 1. At low speeds, there is almost no time dilation.

When your speed is equal to the light speed, this leads to 1/0, meaning infinity. In other words, at the speed of light, there is no more time. Effectively, no time passes for a photon. Ever.

Time dilation alone is not the problem. The same Lorentz factor applies to your momentum. This is the combination of your mass times your speed. Momentum in a closed system remains constant, and is – like the perceived speed of light – relative to the observer. As your speed increases, so does your momentum. At low speeds this energy is negligible, but at speeds approaching the speed of light, this is not. It means the energy cost to go faster increases. Since this uses the same Lorentz factor, it means you require an infinite amount of energy to go as fast as the speed of light.

This is the light barrier. As you approach the speed of light, the energy required to go faster increases exponentially, meaning you can never actually reach it. Note that this applies to anything with mass. No mass means no momentum. Only massless particles – such as photons – can travel at the speed of light.

The speed of light is fast. Currently, our fuel-based rocket drives can’t get anywhere near that fast. Even with increases in technology, the speed of light cannot be reached with conventional drives. For interstellar travel this is a problem. Nothing can go as fast as light, but even light takes four years to reach the nearest star. Light crossing the Milky Way takes roughly 100,000 years to do so.

Without breaking the light barrier, interstellar travel is hardly practical. It is possible, but moving humans to even the nearest star is a task far beyond us at the moment.

So, scifi authors cheat. I’ll write about that in a future post. For now, let the light barrier sink in and the next time you read or watch some science fiction try to spot how they fudged the science.