Deep learning is a field of software that is really ‘hot’ right now. It’s a member of the machine learning family, and used for things such as image and speech recognition. I foresee some disturbing applications in video and audio manipulation for advertising.

What is deep learning?

Artificial neural networks, based on how human neurons work were developed in mathematics seventy years ago. With the development of computers, these neural networks could be created at scale.

The idea of an artificial neural network, is that you have a number of nodes (neurons), that ‘fire’ or not based on their input. This is shown schematically below. 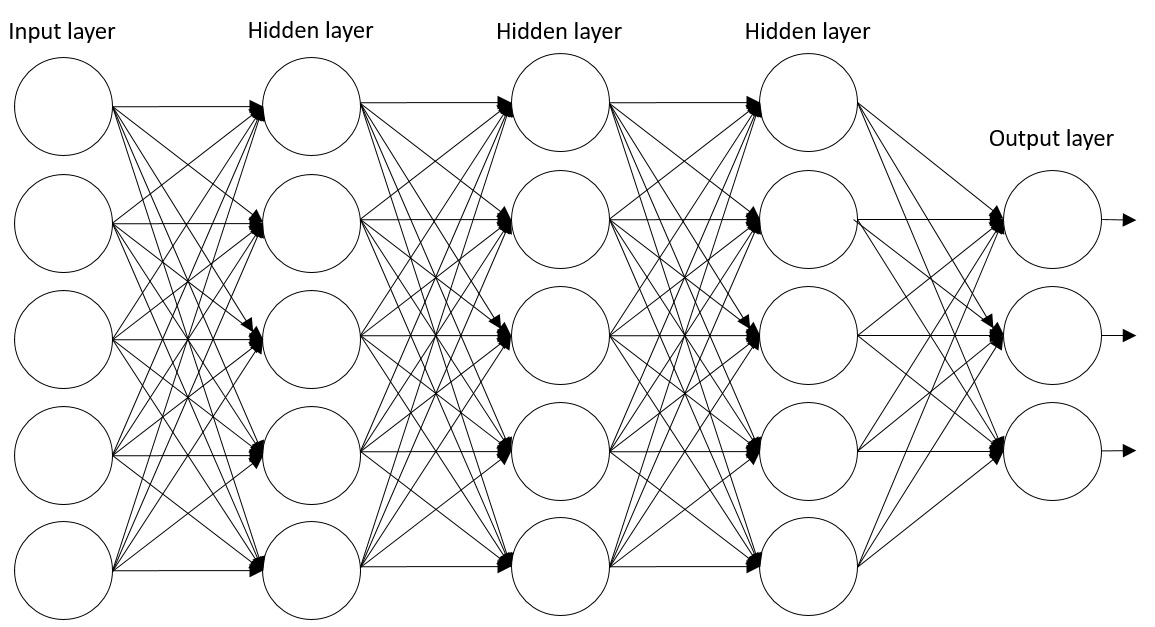 This type of network, which consists of a number of hidden layers of neurons, is what is known as a deep learning network.

What does deep learning do?

The most spectacular applications of deep learning are in the areas of video, images, and speech. Google uses deep learning to tag images automatically. However, they’ve also done some really weird things. For example, they’ve adapted an image algorithm to exaggerate elements in an image it recognized, the deepdream generator. They used lots of animal pictures to train the system, so it sees animals everywhere. The results are freaky.

Another application is changing the light sources in images. This doesn’t sound so spectacular, but it means you can create fake pictures of disturbing quality, and it opens up a whole world of possibilities for faking things.

On top of the technology described above, we’ve also come a long way in manipulating images, video, and audio.

In the following video, Adobe shows off their ability to make audio do what they want: https://www.youtube.com/watch?v=I3l4XLZ59iw

Another rather disturbing technology is the real-time alteration of video footage of people https://www.youtube.com/watch?v=ohmajJTcpNk

Product placement as a rental

However, I was thinking more about applications in the field of advertisement. We all know about product placement, where advertisers pay to have products shown in a movie or television show. Currently, those are one time deals. But with the technology above, it becomes possible to do rental product placement. Imagine this scenario: you tape a tv show where the main character drinks fruit drink X, the broadcasting sponsor. Then, a year later, you rerun the show on another network. You’re stuck with drink X in the show, right?
Enter neural networks and manipulation technology: you can alter the video to show product Y to your viewers in the rerun. You can do this without it being noticeable and with a few clicks. Now you can rent out product placement per broadcast.

Advertisers are already using deep learning to personalize all those banners on Facebook and other sites. With the above technology, you could do more. Imagine advertisers personalizing advertisements inside the movies you watch and the podcasts you follow.
Did you do a search for a new television? Suddenly all the shows have a certain brand of television in the background. And certain panning shots suddenly focus on the television.

Think that’s disturbing? Let’s go one step further. Youtube monetization works by putting ads in front of your videos. Using deep learning, you can alter this to actually insert those adds into the videos themselves, much like product placement. Youtube could even change the words that your favorite Youtube celebrity is saying to promote something.
If that isn’t troubling enough, Youtube ContentId allows content owners to have Youtube automatically flag youtube videos that supposedly violate copyright, even if it falls under fair use. It has happend quite a lot. Imagine the future, in which companies can have the ‘offending’ video dynamically altered. Negative reviews could suddenly become positive. Or cross-selling might be added to videos of products.

Yeah, it’s not a pretty picture. It’s like the Ministry of Truth from Nineteen Eighty-Four, run by marketeers and salesmen.