I read somewhere that only 3 out of a 100 people who start writing a novel actually finish it. Many more people don’t even start. Since I recently finished my second novel, I guess I must be doing something right.

For me, stories always start with a seed. A scene, character, or idea that grabs me and kickstarts my imagination. It’s usually something that makes me think ‘wouldn’t this be cool?’

In my case, those seeds usually involve fantasy or science fiction stuff. For my recently finished novel Aperture, it was the idea of a society where parasites were using human bodies as clothing they could wear.

The next step – if I don’t already have that – is thinking up a main character. Which character fits best with the cool idea, plot twist, or scene I had in mind. Writing is about conflict, meaning that the character has to be in some kind of conflict that can incorporate the seed of the story. In the case of Aperture, I decided on a human resistance fighter, who is quite logically in conflict with a race of parasites using human bodies as clothing.

I usually follow this up with some exploratory writing. I’m a very linear writer. It doesn’t work for me to write scenes from the middle of a story, so I almost inevitably start at what I think is the beginning. I try to work in a hook and go from there.

If I still like what I wrote, I go back to the drawing board. I have a main character and some idea for the central conflict of the book, but that isn’t a complete outline. As I’ve stated in other posts, plot and character arcs are about conflict and promises made to the reader. When I start writing an outline I look at this in depth. There is a scale in writing running from discovery writers who don’t outline to outliners who write out all story details in advance. I lean more toward the outliner side of the scale, although I have some discovery writing tendencies. In fact, I get writer’s block from not having an outline.

For me, M. Harold Page’s Storyteller Tools was an eye opener in this regard. It really changed the way I looked at outlining. I thought I already knew how to outline, having progressed from writing down a string of events and calling it a plot to writing down events in terms of character arcs and plot points. After reading this book though, I evolved to looking at a story as moves and countermoves in a set of intertwined conflicts. Using Page’s method (in my own way) really improved my outline.

I actually needed two attempts before I could finish Aperture – I’ll write a post specifically about that some time. Point is, improving my outline helped me the second time to avoid the story crashing and burning.

The second thing that needs to be done is world building. I have a Dungeons and Dragons background and the Lord of the Rings is one of my favourite stories, meaning I used to think that you needed to spend a lot of time on world building. I used to spend evenings writing down genealogies and historic timelines instead of actually writing. I ended up never finishing those stories.

Nowadays I have a more focused approach. I world build what I need. That’s still an involved process, because one concept leads to another and might lead to some math. For example, in a setting with thousands of worlds inhabited by parasites wearing other species’ bodies as clothing, how many worlds do you need to provide a steady stream of these host bodies? What kind of infrastructure does that require? How many space ships carrying how many hosts does that make? It’s a pretty involved process, as you can imagine, but I try to ignore things that don’t matter to the story.

World building is an important part of fantasy and science fiction stories, but even stories in a contemporary setting will need locations and other things researched. Don’t skimp on it, but don’t let it consume you.

After finishing the outline I get down to work. I start by creating an Excel document to follow my progress. I diligently write down my word count each day and set weekly writing goals.

Below is the diagram from my work on Aperture. 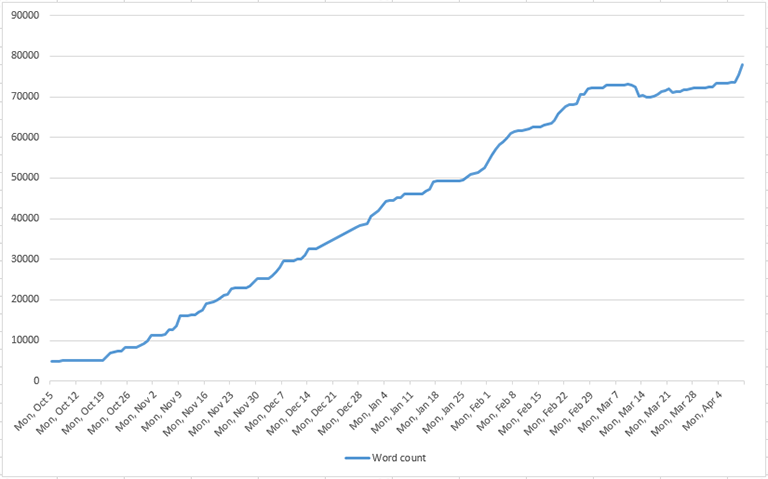 Yes, I am that neurotic. For me that really works. There are some horizontal spots in the diagram, where I was ill, and when my daughter was born, and some steep places where I had time off from work. If you like writing, but have trouble staying focused, this might work for you too.

During the writing, I show parts of the writing to my writing group, although that isn’t always possible. I use the feedback to improve my writing, and sometimes adjust my outline or character arcs.

Draft one – the pre-climax overhaul

As you may have noticed, there is a dip in my progress near the end of my progress diagram.  At the beginning of March I neared the climax of the story, and that’s where all the elements of the story come together.

When some character, plot arc, or subplot doesn’t work, I start to really notice near the climax. I can’t write a good climax when the foundation formed by the rest of the story isn’t solid. Some writers can write on as if they’ve already made changes earlier in their story, but I really can’t. And I can’t continue until I’ve fixed the problems either. So, at certain points in my writing I have to go back and rewrite before going forward, especially near the climax.

When that is done, it’s clear sailing to the finish line, as you can see from the steep line in my progress diagram.

While writing I keep a list of things that worry me. Character X not having enough depth, or a small plot hole Y. Like I said earlier, if it affects the climax of the story too much, I change things immediately, but otherwise I do it now. In Aperture I combined two secondary characters at this point, to create one more rounded one.

At this stage I also look at structural problems: is the tension ratcheting up enough, do I need to raise the stakes at certain points, etc. There was a fight scene in Aperture which took place off-screen between chapters, and I decided to make it on-screen because that would provide some much needed action at that point in the story.

Finally, I look at the introduction of concepts that the reader doesn’t know, to make sure I don’t use a scifi thing without explaining it. For example, I look at the first appearance of alien races. With the world building I do in advance, it’s easy to forget while writing that the reader doesn’t know yet about a certain race. I go back and check if the story doesn’t become confusing – usually I still miss things.

This leads to a more a coherent second draft that is closer to what I want as an end product.

The next step in my writing process is going through the entire story from front to back, on the computer, looking at sentences, tension, build-up, and typos. I smooth the writing so it reads better. I remove duplication, remove similar words that appear too often or too close together. In short, I edit.

This can still lead to some other changes. I might have missed some plot hole, or accidentally changed a character’s hair colour, and I need to change it in the rest of the story as well.

Also, I might have forgotten certain sentences that are now incorrect because of changes I made in an earlier draft. For example, having rolled two characters into one, there might still be places where I refer to ‘three people in the room’, when there are only two now.

I go through this process for the entire story, from beginning to end. By the time I finish this I’ve gone over certain scenes four or five times and I’m nearing the end of my own patience.

Having gone through the entire story front to back on the computer, it’s time for a final pass. I used to print things at this point, but the future is here: I grab my e-book now. I convert the entire story to a mobi file (I’m using a Kindle, otherwise you would use epub) in Scrivener, and go through it on my e-book. I try to read parts out loud as well.

You’d think earlier passes would have gotten most problems, but that’s just not the case. Not for me anyway. Going through a book on (electronic) paper brings out even more stuff that I’ve somehow missed in earlier passes. It always surprises me how much I still find.

Finally, I end up with something I feel is more or less finished. But that’s still not the end of my writing process.

Armed with a finished story, I hand it over to people I know. This is purposefully not my writing group; they’ve already seen parts of the story and might miss things that a fresh reader will pick up on. So, I hand it to people who’ve not seen it before – my wife, for instance, whose judgement about the story as a whole is important to me.

After this step I fix the typos I find, correct more tiny problems, or confusing parts I’m told about, and finally, at the end of a pretty long road I have a story I dare send out to publishers and agents.

So, that’s my entire writing process. If it sounds involved, I agree, it is. It’s also the way I get the best result. I keep improving on it, story after story, to be more efficient and get better results. I hope it helps other writers improve their own process. And if you think my process is wrong or could be improved, let me know in the comments.