Life is Strange is an adventure game about Max Caulfield, a photography student who finds out she has the power to turn back time. I finished it last week and here are my thoughts on it.

Life is Strange is a modern point-and-click adventure in the style of The Walking Dead and Heavy Rain. However, the puzzle aspect is minimal, and it is more an interactive graphic novel than a game. Which isn’t a bad thing, as long as the story can carry its weight.

The story of Life is Strange is the Butterfly Effect meets Scream.

Max Caulfield used to live in Arcadia Bay. She moved away with her parents in her teens, but returns to attend the prestigious Blackwell Academy. One day, in class, she has a vision of a storm destroying the city. She goes to the bathroom to get some air, where she witnesses one of her fellow students pulling a gun and shooting a blue-haired girl. That is when she discovers she can rewind time, and she uses her new power to prevent the murder.

As it turns out, the blue-haired girl is her old best friend Chloe Price, who she hasn’t seen or spoken to in years. Chloe has turned into a punker. She was planning to run away with her friend Rachel Amber, but then Rachel vanished. The two start to investigate Rachel’s disappearance.

Max Caulfield is a shy girl with a talent for photography. With her time-rewind powers, and spurred on by Chloe, she comes out of her shell and starts to interact with those around her. The writers gave her just enough personality to be a character, but little enough that you — as the player — can shape her. This is a pretty well done, although certain decisions later in the game vex me to no end.

Chloe Price has had a rough couple of years. Her father died in a car accident, and she hates her new stepfather. She rebelled, painted her hair blue and started doing drugs. On the other hand, she is the only one fully committed to finding her friend Rachel, and she quickly steps back into Max’s life as her best friend.

Nathan Prescott is a rich brat, who does drugs and accidentally shoots Chloe at the start of the game. He’s a nasty piece of work, but we slowly learn that Nathan’s father is just as bad, and had a big hand in Nathan’s problems.

David Madsen is Chloe’s stepfather and the Blackwell Academy security officer. He’s a war veteran who’s overly paranoid, and has a thing for surveillance. As the story progresses we learn that he’s not the asshole we think he is. He’s one of those characters who you hate, but then grow to love. At least I did.

There are a lot more people in the game, each with their own problems and desires. They’re all pretty fleshed out, although that fleshing out turns the game into a bit of a high-school drama.

Life is Strange is an intriguing interactive graphic novel. It isn’t great, but it can carry its own weight. Most of my gripes are with the ending of the game, which I will discuss below in a section filled with spoilers.

If you like games like The Walking Dead and Heavy Rain, you’ll probably like Life is Strange. If you’re more into Call of Duty… don’t bother. The same applies if you hate high-school dramas.

On to spoilers below another image. 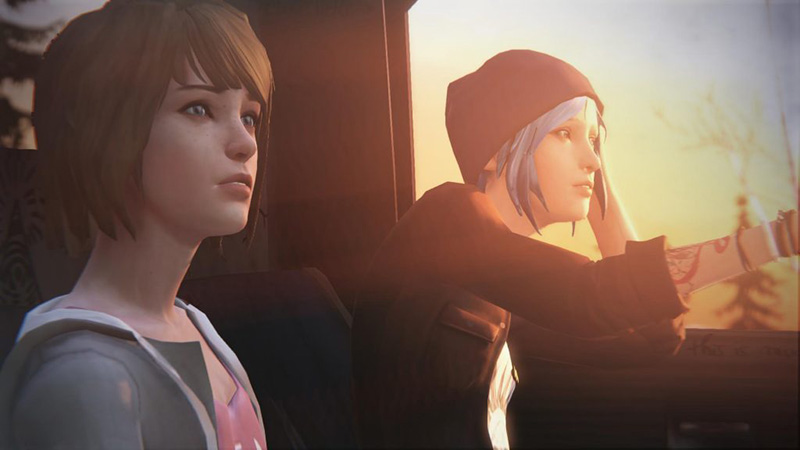 My take on the ending: SPOILERS

I loved the Butterfly Effect. Well, the director’s cut anyway. If you haven’t seen the movie, it’s about a college student who can travel back in time to specific moments in his youth and change them. He does so and tries to make things better, but each time, things don’t end up as perfect as he hopes.

Life is Strange tries to send the same message: if you could change time, you shouldn’t, because it will only make things worse. We see this play out twice throughout the game. Once when you change the past so that Chloe’s father doesn’t die, and in the final episode where you repeatedly change things and they never turn out well. Unfortunately, both times I found it wasn’t handled well.

When you save Chloe’s dad, it turns out this leads to Chloe having an accident and ending up paralyzed and terminally ill. So, Max turns back time again and returns things to how they were.

When you save Chloe’s dad, this doesn’t lead directly to her accident. It’s just bad luck. The message is: changing time could make things worse because other random things may happen. The thing is: they could also not happen. Random events do not a plot make.

In the final episode, Max starts to actively go back and forth between past and present to change things. Each time things don’t turn out right, and in the end you have to choose between preventing Max’s original time-rewind (which saved Chloe’s life) or having Arcadia Bay and its inhabitants be killed by a tornado.

Again, on the surface it’s like the Butterfly Effect, only it really isn’t. At one point everything has turned out fine (the killer apprehended, Chloe safe, Max winning a photography contest), only things get messed up by the tornado destroying Arcadia Bay.

So, really, what’s the moral of the story? Apparently that whichever higher being gave her these powers is a colossal asshole. They let her save a life and rekindle a friendship, only to punish her for doing so. And punish her by having her tortured, having her friend commit suicide, having her euthanize her best friend, and finally having her choose to let her friend get shot or kill off a town. Well, yippee.

Aside from the ending, it’s a good game. And time travel stories are never easy to write well, so kudos to the writers for picking up that gauntlet; a pity they didn’t quite succeed.